Hyperthin condom with a stylish design from ONE. But what exactly is hyper-thin?
A common condom is about 15% thinner than other condoms. That is, a condom that is 0.06 mm will instead be about 0.05 mm in thickness. The next step is 0.04 mm, which means that this condom is 30-35% thinner than ONE's other condoms. Not just thin - it's hyper-thin!
Dimensions are stated in mm

Durex London Wet is a lubricated condom that is simple and effective.

About 5% larger than" normal" sized condomes. 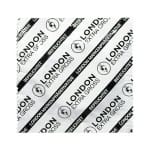 The condoms are larger than regular condoms for extra comfort during sex.

It's large AND thin!

Hyperthin USA-condom with their 0.04 mm that comes with gorgeous designed packaging.