The French condom company SOFT has been around for over 15 years. SOFT is one of the largest condom manufacturers in France and has a 20% market share. SOFT was honored to be the official supplier of condoms when the World Cup was held in France in 1998.

SOFT is both CE and NF certified
The CE certificate is EU's quality control, ensuring that the condom meets the EU's basic requirements. NF (Norme Française) is the French equivalent. NF is considered to have use the strictest standards for condoms in the world. NF-certification is a voluntary initiative by the manufacturer in order to further ensure product quality. New NF tests are done every year.

Total of 7 products in Soft 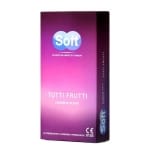 An all-time favourite with the girls.