SKYN is a series of latex-free condoms from Manix, a leading French brand with over 20 years in the industry. Focus is on thin latex free condoms that gives a natural feeling.

SKYN Original and SKYN Large is made of polyisoprene (also called sensoprene), which is a scientifically developed material that provides a soft and natural feeling. The softness allows the condom to be flexible and follows the movements in a completely different way than the plastic condoms. Polyisoprene combines the strength of the latex with the sensitivity of ultra-thin condoms. Manix is the first to use this material.

It is estimated that 1-2% of the population suffer from latex allergies and for those there have been very few condom options. Sizes are limited and condoms are most often made of plastic, such as Pasante Sensiva, which is not preferable for everyone. Plastic Condoms are not as elastic as latex condoms and even if they are thin it lacks some feeling that the mobility of a "regular" condom provides.
Manix then decided to produce condoms in a new material, and the result was these amazing condoms that will delight both latex allergies and those who want a really, really thin condom!

The condoms are manufactured according to the highest international quality standards (ISO 4074:2002), ensuring maximum safety and security. All condoms are electronically tested before packaging.

Total of 10 products in Skyn 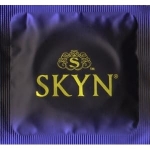 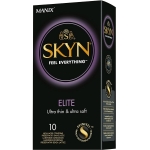 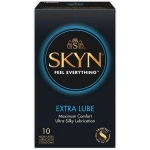 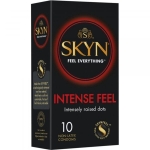 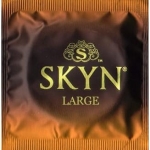 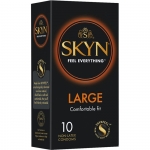