In stock. Order now and we will ship your order before wednesday

LELO Hex is a condom that has no knots or grooves. It is special in another way.
The condom is made of Hexagons * which gives the condom a whole new protection. LELO itself says the following:
This is the first major innovation in condoms of 70 years. Instead of adding grooves or more lubricants, we took a look at the actual structure of the condom and found a way to make it both stronger and thinner. Hence the name! Hex condoms integrate 350 individual hexagons across the surface to imitate the properties of graphite (which is about 100 times stronger than steel and one of the thinnest materials the person knows). There is a reason why honey beans have the shape they have, "says Filip Sedic, the inventor of LELO Hex. Hexagons are strong, symmetrical, and perfect. They are the go-to shape of nature for something that must be easy at the same time as it is incredibly strong.
In size, the condom is slightly larger than the most common condoms. However, not enough for us to call it XL. But check the thickness! Only 0.045 mm. You can also feel when the condom feels very soft and comfortable in the material.
Size: 190 x 0.045 x 54 mm
* A hexagon is a geometric form consisting of six edges. 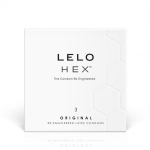